The other day, the Boyfriend caught me doing something I'd managed to keep hidden for the past 6 months, out of embarrassment really and a desire not to be seen as a complete weirdo.

The conversation went something like this:
"What's that?"
"Umm. Have you fed the cats?"
"Yes, an hour ago. What are you doing?"
"Ahh. What would you like to do today?"
"It's Wednesday, I'm going to work. Seriously, what is that?"
"So it is. I'd better get dressed then!"
"Quit stalling and just tell me what you're up to. Is that your diary?"

Now reader, there is a diary but this was not it and I had no other conversational blind alley to lead him down. It was time to 'fess up to some serious nerdiness.

And right there and then, I saw my status as the Not-Nerdy one of the relationship disintegrate and a new level of Equal-Nerd was achieved. Which is all to the good, obviously. Yes, it is true, I keep a reading diary and have done for the past 5 years. It wasn't my original idea, but something I read (ironically, I forget where) someone else did to keep track of all the books she had read each year. "That's a good idea," I thought to myself as I realised I'd made it through 2013 and could only remember the handful of books that stuck in my head. "That will stop me standing at the library, book in hand, desperately trying to work out of I've already read it or not." Something that happened on a frequent basis.

So I started one in the January of 2014 and I haven't stopped yet. It reveals things about a person, this reading diary lark, but I'll let you decide what this year's reveals about me...

January: How to be Right by James O'Brien, Take Courage by Samantha Ellis, The Unfortunates by Laurie Graham, Altered States by Anita Brooker, Cash - the Autobiography by Johnny Cash, Birdcage Walk by Helen Dunmore, Peril at End House by Agatha Christie, The Black Tower by PD James, Third Girl by Agatha Christie

February: biography of Mary Wesley by Patrick Marnham, Bigger than Hitler Better than Christ by Rik Mayall, Night Watch by Terry Pratchett, An Unsuitable Match by Joanna Trollop, Unpleasantness at the Bellona by Dorothy Sayers, Lord Peter Views the Body by DS

March: Not That Sort of Girl by Mary Wesley, Rise and Fall of the Dinosaurs by Steve Brusatte, Slaughterhouse 5 by Kurt Vonnegut, Coal Black Mornings by Brett Anderson, Diary of a Nobody by the Grossmiths, Crap Lyrics by Johnny Sharp, The Belting Inheritance by Julian Symons, Tinker Tailor Soldier Spy by John le Carre, Patrick Leigh Fermor biography by Artemis Cooper

April: To Throw Away Unopened by Viv Albertine, All That Remains by Sue Black, Notes on a Nervous Planet by Matt Haig, The Big Sleep by Raymond Chandler, Almost Everything by Annie Lamott, Men Explain Things to Me by Rebecca Solnit

May: Dirk Gently's Holistic Detective Agency by Douglas Adams, The Private Patient by PD James, Have Mercy on us All by Fred Vargas, Wash this Blood Clean from my Hands by FV, Dead Water by Ngaio Marsh, An Uncertain Place by FV, Ghost Riders of the Orderbec by FV

June: Good Omens by Terry Pratchett and Neil Gaiman, Aunt Margaret's Lover by Mavis Cheek, No Fond Return of Love by Barbara Pym, Playback by Raymond Chandler, The Eye in the Door by Pat Barker, Gilead by Marilynn Robinson, Room with a View by EM Forster 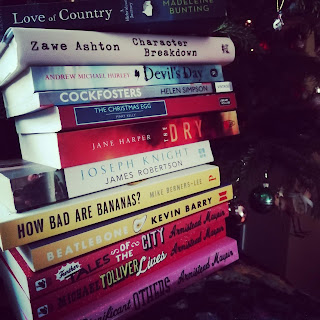 August: Grow Your Own Vegetables by Joy Larkham, Goodbye to all That by Robert Graves, When all is Said by Anne Griffin, Men at Arms by Terry Pratchett, The Fifth Elephant by TP, 100 Graves to Visit Before you Die by Anne Treveman

September: The Seven Deaths of Evelyn Hardcastle by Stuart Turton, Cargo of Eagles by Margery Allingham, How Not to be a Boy by Robert Webb, Regeneration by Pat Barker, Wise Children by Angela Carter, This Poison will Remain by Fred Vargas, Proof by Dick Francis

October: Diary of a Bookseller by Shaun Blythell, Wild Strawberries by Angela Thirkell, Bearmouth by Liz Hyder, Misogynies by Joan Smith, Death is now my Neighbour by Colin Dexter, Death at the Chase by Michael Innes, the Rising Tide by Molly Keane, the Jewel that was Ours by Colin Dexter, Educated by Tara Westover, Call for the Dead by John le Carre

November: Lords and Ladies by Terry Pratchett, Best Man to Die, the Veiled One and Unkindness of Ravens by Ruth Rendell, One Upon a River by Diane Setterfield, My Sister the Serial Killer by Oyinka Braithwaite, That's me in the Corner by Andrew Collins, I Am I Am I Am by Maggie O'Farrell, the Child that Books Built by Francis Spufford, Between Friends by Kathleen Rowntree

My favourites are marked with links to reviews (I always make an additional list of favourites too; my god, I am a super nerd). Some are rereads, more are new reads. If I was a proper book blogger, I'd do reviews of them but then I'd have no time for reading, so no. The only one I'm tempted to review is Bearmouth by my friend, Liz Hyder, because it's such a breathtaking, tour de force that I think all young adults (and old ones) should read it. It's extraordinary, with a unique, captivating voice, and a plot that sends shivers down your spine. Her research is played lightly, no heavy handed moralising here, just a story that carries you down into the earth and then back up into the light. Read it, goddamit.

Rereading Lords and Ladies made me very because there will never be any more Nanny Ogg or Magrat Garlick and that makes me sadder than anything. I miss Terry Pratchett.

Seven Deaths of Evelyn Hardcastle made me impatient and, at the end, bloody furious. What kind of an ending was that? Where was his editor? Creative writing courses have a lot to answer for. At least it didn't make me the same level of furious as Gone Girl did - I actually wrote "RUBBISH" in the margin of the diary next to that one.

Judging by the level of crime reading in May, I was stressed out. Given that was a month before we moved house, it's not surprising. I always turn to fictional crime when real life gets stressy. At least I chose three queens of crime fiction to soothe my brain with. If you've never read Vargas, put her on your list.

And this is why I keep the diary. Looking back at it sparks memories, joy and sadness, irritation or relief at finally getting through a big text that I wasn't really interested in (Cash and Fermor biographies, I'm looking at you). And, occasionally, surprise: I did not enjoy Notes on a Nervous Planet, I bloody loved Ghostland.

Character Breakdown is worth a special mention. Couldn't stop turning the pages on that one, jaw open in horror at what the acting profession demands of young women.

Whatever, you've found yourself reading this year, I hope the pages kept turning, new worlds emerged and real life was a little better at the end of it. I now have a pile of books to keep me out of mischief for a few weeks...maybe. Happy new year!

PS: this isn't about numbers or showing off but about the very deep joy books bring me. I felt this needed reiterating as Andy Miller gets a lot of stick for how much he reads. His blog post explains how and why he does, as well as wondering at the mindset of people who get angry over a picture of books on a table.